With an extensive list of golf courses and sports fields using the seeded paspalum Pure Dynasty, it has earned a reputation for producing an excellent playing surface and offering impressive sustainability features. As an extremely salt tolerant turfgrass, Pure Dynasty thrives in coastal applications and those using effluent irrigation. Now Pure Dynasty is putting its superpower to work off the links and playing fields as a key component in an innovative system that cleans stormwater.

The Problem with Stormwater Ponds

Retention ponds in stormwater treatment areas (STA) play a valuable role in diverting water. Residential and commercial developments, as well as municipalities, use these ponds to control erosion, prevent flooding, and capture the runoff that is often rife with nutrient pollution. But over time, the nutrients amass, resulting in an abundance of unwanted plants growing in the water, such as algae, duckweed, and hydrilla. Chemical treatment to deal with the nuisance vegetation is an option but comes with environmental costs. Beemats, a floating wetland system, offers an effective and environmentally friendly solution.

Steve Beeman has made a career in plants. Although his original plan while studying at the University of Hawaii was to work with sharks, he became a botanist instead of a marine zoologist. As an expert in native grasses, Beeman spent many years working with state agencies on plant issues and shoreline protection. He later transitioned into the golf business, assisting developers and architects in selecting the appropriate native grasses for tee box landscaping, deeper rough, and out-of-play areas. When golf development slowed in 2008, he began working on floating wetlands, created an improved system, and was issued a patent for Beemats in 2009.

The proprietary Beemat system uses plants to remove nitrogen and phosphorus from virtually any body of water, excluding the ocean: ponds, canals, STAs, lakes, estuaries, and rivers. Beeman’s patented system includes a closed-cell foam mat with cut-outs for aerator pots made of biodegradable plastic. The size of the mat depends on the size of the body of water. Beeman has found that mats equaling about five percent of the total water surface area are most effective. The pots contain a carefully curated blend of plants that do the work – but more about those later. The Beemats are adaptable for any size project, portable, and easily installed.

Most of Beeman’s customers are entities seeking assistance to meet state water quality standards for runoff into natural waters. These entities could be local governments, new developers, or older neighborhoods. As part of the Clean Water Act, states enforce total maximum daily loads (TMDL) for pollutants of which nitrogen and phosphorus are key culprits. A collection of approved methods for reducing pollution outputs is established, with Beemats being one of those.

“Beemats provide a very appealing option. They are extremely effective and chemical-free, and all of the plants and materials are reusable and recyclable. Developers appreciate that they don’t take up more dry land, say in the form of additional retention ponds,” said Beeman. “You just use your existing retention ponds and add floating wetlands.”

Beeman describes Beemats as “active biological treatment systems that utilize macrophyte plants to remove nitrogen and phosphorus from the water, the same way terrestrial plants deplete those nutrients from the soil.” In other words, the plants in the floating mats grow hydroponically by taking the nutrients they need from the water – the same nutrients that are classified as pollutants. As the plants in the Beemats grow, they use up the nitrogen and phosphorus that algae, duckweed, and hydrilla need to survive, causing the potentially dangerous, nuisance vegetation to disappear naturally.

The process begins with Beeman determining the proper area of mats needed for a project and assembling the mats with plants. Then, the Beemats are deployed into the body of water and anchored.

“We discovered the hard way during Florida storms that only one anchor point works best,” said Beeman. “Otherwise, strong winds can cause problems. With one anchor point, the mat simply moves around it.”

As the plants in the Beemats grow, the roots and attached biofilm below the mats accumulate and store the soluble nutrients. Above the water, the plants are growing into attractive islands that provide habitats for wildlife.

Approximately three to four times a year, Beeman’s crew will “harvest” the mats. The process involves removing the mats from the water and trimming – or harvesting – the biomass consisting of the plant tops and roots – a haircut of sorts. This process is necessary for optimal performance as the biomass sequesters the nutrients. If it were not removed periodically, the plants in the mats would eventually stop growing and degrade, and then the nutrients would return to the water, defeating the purpose.

After the harvesting, the mats are deployed once again to continue the growing and cleaning process. The collected biomass is then composted and mixed with peat to produce a natural fertilizer utilized in Beeman’s nursery, where he grows the plant material for the Beemats. Full circle.

Through experimentation, Beeman has fine-tuned the plant list for optimal water cleaning results. An integral part of the equation is Pure Dynasty Seeded Paspalum. During his years working with golf courses, Beeman became familiar with paspalum’s advantages. When he began working on the concept of floating islands, Pure Dynasty was being introduced to the market. As the newest and most advanced seeded paspalum, the variety caught Beeman’s attention with its fine-bladed texture and superior salt tolerance. He reached out to Atlas Turf International for samples.

“Steve and I go way back,” said John Holmes, president of Atlas Turf and partner with Pure Seed, the developer of Pure Dynasty. “From working together on projects in the Caribbean and Florida, I knew that Steve was more than qualified to take the concept of floating wetlands to the next level. And I was thrilled that he wanted to incorporate Pure Dynasty.”

From his first trials, Beeman saw that his hunch was correct.

“In the mats, Pure Dynasty produces a nice, dense surface that lends itself well to mowing and trimming at harvest time, and more importantly, it develops a stout root system that does its job of picking up the nutrients. The Pure Dynasty does an outstanding job. It’s truly the workhorse of the system,” said Beeman.

Pure Dynasty accounts for roughly 60% of the total plant content of the mats. Beeman incorporates it around the edges and fills the center with plants such as coastal cordgrass for saltwater applications.

Despite thriving in high salinity areas, Pure Dynasty does not require sodic conditions and works just as well in freshwater applications. For these mats, Beeman supplements the paspalum with some native flowering species.

“Usually, when dealing with freshwater ponds, the area is residential and needs to look good,” said Beeman. “We don’t want mats in communities or next to walking trails to be a weedy eyesore or even just plain grass. So for those, we may include flowering annuals like begonias or marigolds with the native aquatic flowers.”

“The flowers can actually take up nutrients too as well as add color and attract the birds,” Beeman said. “Around the edges, Pure Dynasty creates a low-growing, indestructible habitat for the animals in the pond – wading birds, turtles, and sometimes alligators. The Pure Dynasty looks good, too, though. One thing I really like about it is that even when it gets tall, it’s still fine-bladed and nice looking.”

No matter how good it looks, Beemats have an operational purpose, and Beeman’s customers expect results – quantifiable results. Most clients aim to reduce nutrient output by about 20%, allowing them to meet the standards in place for Clean Water Act compliance.

“Nutrient removal rates can be directly measured as a percentage of the collected biomass,” said Beeman. “With our Beemat system, we can usually get 25-30%.”

Beeman is able to document these results through testing. When the crew harvests the Beemats, all of the biomass is collected. He puts a sub-sample in a plastic bag over ice and takes this to an independent lab. There, the sample is weighed and then put in a kiln to dry for 24 to 48 hours. The dried material is pulverized into a powder which is analyzed for exact nitrogen and phosphorus content. The lab then converts that back to a percentage of the fresh weight when the sample was first delivered. Using the weight of the total amount of biomass harvested, Beeman can take the percentages calculated by the lab and extrapolate the total reduction percentages for those mats.

“This process is more accurate than simply taking water samples,” said Beeman. “Those are typically a snapshot of the nutrient load in the water on any given day. The levels not only fluctuate by day but can be different from one spot in the body of water to another.”

So far, Beemats are used in 30 states, with Pure Dynasty incorporated in most.

“We couldn’t be happier with the Pure Dynasty and its part in making Beemats successful,” said Beeman. “It really works. Floating wetlands only require three to eight percent of the surface area of the STA to do their job. They save infrastructure, real estate, earth moving, construction, and time. Floating wetlands offer so many benefits. It just makes sense.” 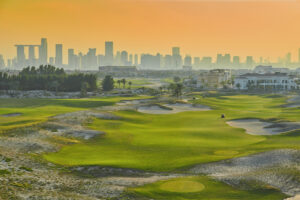 Find out what made Platinum TE stand out as the optimal turfgrass choice for the biggest sporting stage.