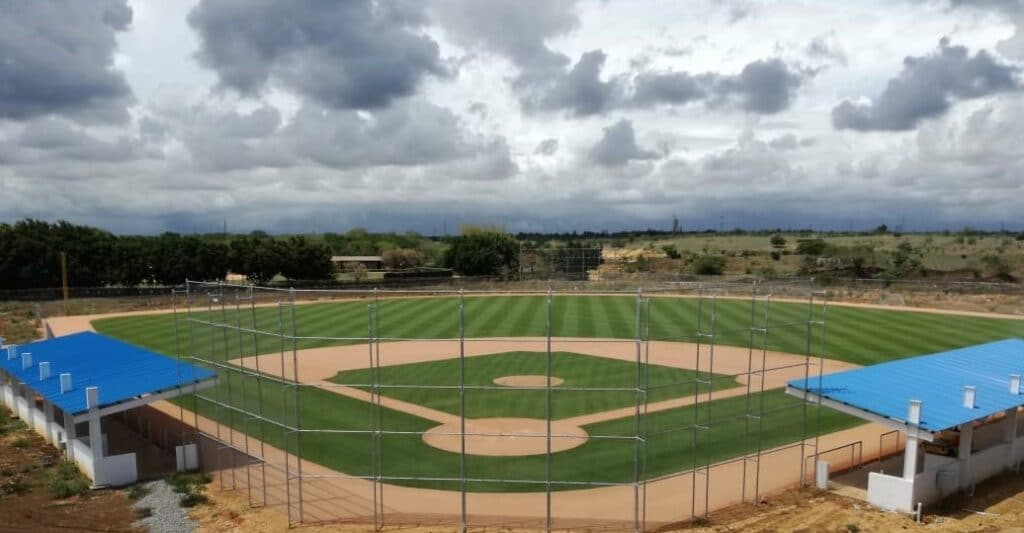 In the Dominican Republic, baseball is big business. Each of the thirty Major League Baseball clubs operates a training facility in the Caribbean country. Until recently, the clubs leased the properties, and field design and maintenance were the responsibility of the landlords with mediocre standards. As that trend rapidly changes, Pure Dynasty Seeded Paspalum is earning leadoff batter status.

The Texas Rangers made the move from a leased facility to their vastly improved 26-acre US$12.5 million academy. Among the improvements is the turfgrass on the fields – Pure Dynasty Seeded Paspalum. Each of the two full fields, two half fields, and agility field features the advanced paspalum developed by Pure-Seed Testing and marketed worldwide by Atlas Turf International.

“The quality of the turf is really high-end,” said Richard Stevens, President and Construction Manager of Green Ball Golf Construction, field contractor of the Texas Rangers training facility. “There is no comparison to what other facilities have in the Dominican Republic. Most of the other fields are local zoysia. They wear out quickly and don’t recover fast enough. When it comes to quality, the Pure Dynasty is much better.”

Prior to field construction during the turfgrass selection stage, Stevens was challenged by the owners to provide the “best of the best.” In contrast to the ordinary practice of using locally grown zoysias originating in cow pastures, Stevens recommended sprigging with a more advanced turfgrass from the United States. Cost issues and complications with importing vegetative product led Stevens to consider Pure Dynasty. With the seeded product, importation from the U.S. was less problematic and less expensive than vegetative varieties.

As the contractor for the renovation of Playa Grande Golf Club, also in the Dominican Republic, Stevens planted Pure Dynasty there and found the quality to be superior to the bermudagrass variety it replaced as well as the older seeded paspalum variety Sea Spray.

“I took [the Texas Rangers developers] to Playa Grande to see the Pure Dynasty, and they liked what they saw,” said Stevens. “They were impressed with the quality, the color, and the strength.”

According to Allen Rowin, director of Dominican Operations for the Texas Rangers, Pure Dynasty met the requirements sought in a turfgrass.

“For baseball, you really need a turfgrass that drains well, is wear-resistant, provides a quality playing surface, and doesn’t require a ton of maintenance. This is what we got with Pure Dynasty,” said Rowin.

The planting of the Pure Dynasty on the first playing field began in the fall and proceeded in phases as construction of the remaining fields progressed. From experience with previous projects in the area, Stevens knew the challenges of seeding in the Dominican Republic and implemented hydroseeding.

“Seeding is easy to do, but with the amount of rain we have here, erosion can present a problem during grow-in.”

The original plan scheduled planting to be completed by August but was delayed due to issues in other construction areas. While the Dominican Republic enjoys beautiful weather year-round, the winter months are not the ideal growing times due to fewer hours of sunlight, resulting in slower growth. Despite this, Stevens saw germination in only ten days.

The success of the Pure Dynasty at the Texas Rangers training facility is indicative of paspalum’s track record in the region. Numerous golf courses in the Dominican Republic and other Caribbean countries feature the species. Besides Playa Grande, other courses featuring Pure Dynasty in the region include La Cana Golf Course at Puntacana Resort and Club in the Dominican Republic, Blue Bay Golf in Curaçao, Cuisinart Golf Resort and Spa at Rendezvous Bay Anguilla in the British West Indies, Sandals Golf and Country Club at Cap Estate and Sandals Regency La Toc Golf Club both in Saint Lucia, and Four Seasons Resort at Peninsula Papagayo in Costa Rica.

The vegetative paspalum variety Platinum TE is featured at Baker’s Bay Golf and Ocean Club in the Bahamas, Punta Espada Golf Club and Hard Rock Golf Club at Cana Bay both in the Dominican Republic, and San Buenas Golf Resort and Spa in Costa Rica.

When asked what makes paspalum an optimal turfgrass choice in the Caribbean, Stevens cites one of the primary advantages of the species.

“Paspalum is famous for its salt tolerance. In the Dominican Republic, especially on the east side of the country, the water is brackish.”

While the Texas Rangers facility in Boca Chica has better water quality than some other areas of the country, additional characteristics of paspalum offer significant advantages. With the fields in use on average four to six hours per day, wear tolerance and rapid turf recovery are essential.

“Pure Dynasty’s ability to recover quickly from injury is a key performance benefit,” said Stevens. “With the amount of rain we get here and the wear and tear the fields take, other grasses end up with areas that get trampled easily. They suffer a lot and take a long time to recover. That isn’t the case with the Pure Dynasty. As a paspalum which spreads by rhizomes, Pure Dynasty is quick to repair and aggressive enough to choke out weeds.”

Player and staff reactions to the new turfgrass have also been positive.

“The players love it. It is the best turf they’ve ever played on,” said Rowin. “And the head groundskeeper had only good things to say. He loves the color, density, and ball play, and finds it easy to maintain.”

Besides performance, appearance is another distinguishing characteristic of Pure Dynasty.

“It has a dark green, unique color,” said Stevens. “Colorwise, the Pure Dynasty is incredible. Unlike the local zoysias that are yellowish and don’t darken up, Pure Dynasty looks much better.”

As the pendulum swings to clubs owning and managing their own facilities in the Dominican Republic, the quality of field maintenance is dramatically improving.

“The bar is being raised to allow for us to have U.S.-standard field maintenance,” said Stevens. “The culture of implementing quality turf maintenance is just beginning. Our company is contracted to manage the San Francisco Giants facility, and we are looking to replace their turf with an improved variety. It makes a big difference to apply high-quality maintenance practices and invest in quality turfgrasses.”

For more information on sports field turfgrasses, contact us today.